Spring is here well and truly by now. We have had some amazingly warm days lately, which make you start to think that summer is here and the woolly hats and gloves and warm coats can be stored away till the autumn, and then it turns cold again.
Since my last post, there has been a fair amount* of activity. I decided I really need to come up with a better system of uploading blog posts and photos as I really want to continue blogging but it all seems such a faff sometimes. I have photos uploaded to Ravelry from flickr and photos for the blog elsewhere, holiday photos somewhere else entirely and there’s no continuity. However, in my usual way, I haven’t done anything about it yet.
*well, quite a lot for such an intrinsically lazy person as myself.

So...what's been happening...
I’m another year older... eep... and now owner of a few more knitting books and crafty bits & pieces, visited the zoo, played out in the snow a lot and then we had an amazing holiday in the mountains of Slovenia. Slovenia is a beautiful place, the mountains and lakes are stunning and it’s people so friendly and welcoming. Since the introduction of the Euro and all that brings with it, it’s not as cheap a holiday option as it would have been a few years ago, but I would definitely recommend it. There are holiday snaps posted in my photo album here. We have been out and about closer to home as well. And, even as I type, there are plans afoot (ha, bit of a walking pun there) for a major expedition in Scotland in the not too distant future. We have been out walking every day and doing plenty of shopping in preparation but I have been making time for more leisurely pursuits. 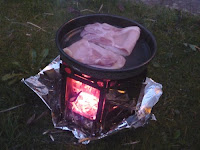 Stove testing in the back garden - tiny pan too small for a couple of bacon rashers!
To the knitting. My Edith Hat is finished, worn lots (nearly lost, but I realised it had fallen out of my pocket and ran back to pick it up, phew!) and much admired. It was a joy to make and Johanna is so helpful and friendly. I would recommend any of her patterns. I have the Signe Mitten patterns in my library, and will be making a pair to match my hat at some point before winter comes around again. Which, at the rate my life is passing me by, won’t be long. Most of the following pictures are shameless ripped off from my Ravelry projects page. Hat out on location on Rishworth Moor
What else… I made some socks for my nephew Samuel who, at 6 years old, has way bigger feet than he has any right to, so I had to rip them back and start again after we’d been over to visit for a weekend. I don’t think he noticed his aunt staring in horror at his hobbit-like feet. I hope not anyway, I don’t want to give him a complex. Huge kiddie sock
Then I made a wavy baby blanket for Emma’s as-yet-unborn baby boy. I love the wavy look of the increases and decreases, although wasn’t too happy with the overall shape of the blanket. It didn’t appear to know whether it wanted to be round or square, and would need to be sternly blocked to get it to stay in either shape. Being knitted in acrylic (I don’t believe that there are many mothers of very young children that would thank you and mean it for the gift of something hand wash only) and likely to require cleaning at regular intervals, blocking wouldn’t be an easy or practical solution so I left it in it’s undecided state. The urge to knit lace kicked in at the weekend - the sunny, warmer days making me think of light, floaty yarns and delicate fabrics. At my knitting group, a few people had expressed an interest in making the Ishbel shawl and there was even talk of a knitalong. We discussed several pattern possibilities, and as a result my Ravelry queue has now increased alarmingly. Luckily, I have plenty of laceweight and pretty sock yarns in the stash for all eventualities. I have begun my Ishbel in the lovely Jade Sapphire Yarns Lacey Lamb that was a swap gift from itgirl. 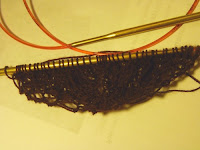 A Little About Me

Hi! Thanks for stopping by. This is my blog about knitting, wool, sheep and walking.